At the end of July, I went on the Warner Brothers Studio Tour with my best friend, for the second time. My post from last year’s trip can be found here for those interested!

I have to say, I absolutely loved it, possibly even more than the first time round.

The whole lobby and entrance to the tour has been changed since we were there last year and it looks amazing. The dragon above is suspended from the ceiling in the lobby.

This year, we saw the set of the Weasley’s kitchen; something which we didn’t see last year. Neither of us are sure if the set was there last year and we missed it (possible) or if it is a new addition, but either way, it was pretty cool.

The other new addition since last year was Gringotts Bank, which we were really looking forward to seeing. Let me tell you, it did not disappoint! 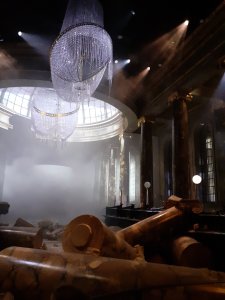 You can walk through Gringotts Bank as it was while standing, see inside some of the vaults and then see it as it was after being destroyed by the dragon in Deathly Hallows. There is a whole animated, special effects scene in the ruins of the bank which is absolutely amazing but my video of it is too long and won’t upload!

Diagon Alley is still my favourite part of the tour, but Gringotts Bank is a very close second!

Another notable addition is the Chocolate Frog Cafe which my friend was super excited to try. I only got a tea, so I can’t comment on the food, but my friend bought a cake and said that while it was nice, it was very sickly.

The cups were cute though!

I ended up spending more in the giftshop this year than last year (oops).

I bought a Chocolate Frog for my brother – he wanted the chocolate, I wanted the card. Unfortunately, the card was Salazaar Slytherin…which I got last year.

I also bought my brother a bookmark and I’ve been regretting the fact that I didn’t buy myself one ever since.

I bought a box of Peppermint Toads for my parents – they’re actually really nice. They taste a little like After Eight chocolates.

For my grandparents and boyfriend, I bought postcards of Diagon Alley and the model of Hogwarts.

The only thing I bought for myself was a Hufflepuff pencil…still not sure how or why.

I did enjoy the tour more this time, partly because there was so much more to see…we’re already planning next year’s visit!

Have you been to the studios? What was your favourite part?

3 thoughts on “Thoughts on the Harry Potter Studio Tour #2”